WHEN YOU TAKE A WRONG TURN….LOOK FOR THE RAINBOW 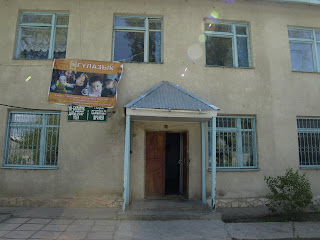 THE OLD RUSSIAN CHILDREN’S CLINIC
SERVING MOST OF TOKMOK 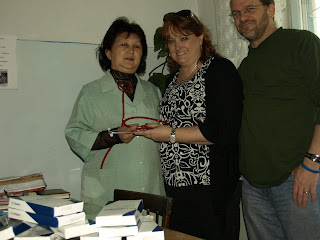 STETHOSCOPES – BEING GIVEN TO DR. DENARIA
A GIFT FROM KINDRED HOSPITAL IN
TUCSON, ARIZONA 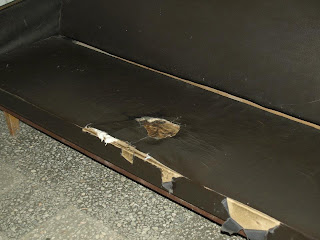 THE BENCHES FOR WAITING – ONLY A FEW – AND VERY BAD
CONDITION 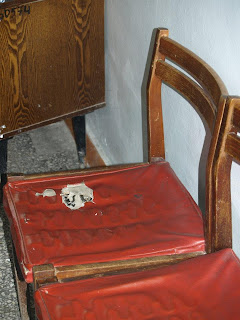 CHAIRS FOR OFFICES AND WAITING ROOMS ARE BROKEN
AND WOBBLY 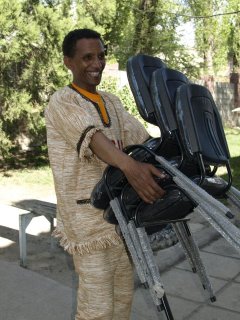 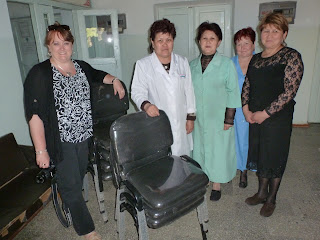 KIM, WITH THE MEDICAL TEAM ACCEPTING THE CHAIRS
AND THIS WAS JUST A LITTLE GIFT FROM LAMb, YET A GIANT
BLESSING FOR THEM
SO HERE IS THE STORY…

TODAY WAS ONE OF THOSE DAYS…we headed out to deliver stethoscopes to several hospitals and clinics.  We organized our bags before hand and knew our route and made our plan.  AND  of course this is KYRYGZSTAN where nothing goes as planned – well at least not very often.  Our plan was to drop the bags of stethoscopes to our dear partners and doctors at three different hospitals and one clinic that is a registered NGO operated clinic.  HMMMMM things were about to change.

So off we went:

STOP 1:  We had an appointment with Dr. Tatiana at the baby orphanage for 10:00am.  We arrived about 10:15 (interpreter showed up late).  Dr. T. was going to be busy at 10:30am.  Once there we introduced our team members – Kim, Randy and Josiah.  We talked about the past training events completed for prospective adoptive parents and plans for the future for more training.  Then she, Dr. T. asked if we might have time and like to see three different groups do their Easter performance.  WELL, YES!  Oh my, what a joy to see these little ones dance, sing and perform for the staff and us.  It was more than delightful.  They were dressed in costume and looked so beautiful.  Well, now a fair bit later than expected we left the orphanage and continued to our “planned” second stop the Baby Hospital just up the road.

STOP 2:  We had two taxi’s and our taxi (which was leading the way) did not know our routine or our common stops, so when we asked him to head on to the baby hospital, he started in the wrong direction.  Our interpreter is new to this kind of activity as well, so she was confused as well.  She said there were two children’s hospitals on the same road we were on.  OKAY, let’s go to the one you have us headed towards.  Never been there before.  (SO WE QUICKLY TOOK OUT SOME THINGS FROM ONE OF OUR STETHOSCOPE BAGS –  SO WE COULD GIVE THEM STETHOSCOPES – NEVER WANTING TO MAKE A VISIT EMPTY HANDED.)  We “remodelled” the bag for the adult hospital – took out the catheters and lifts, etc….In we went.

So we entered and were able to meet the head doctor – Dr. Denaria.  She was cordial and kind and about two hours later we would be leaving as friends.  The Dr. had lots to say to us, so pleased for the gift and wanted to show us around and OF COURSE WE HAD TO HAVE TEA AND “BREAD.”  She reminded us this is a Muslim tradition – her words!  We were saddened by the tour and the condition of the furniture in her offices and exam rooms.  Chairs she described as being from the Soviet Era.  Broken, and very bad for sitting.  In addition, the waiting mothers and children had little to nothing to sit on as they waited and waited for services.  She leads the largest clinic (not a hospital at all) in the city of Tokmok.  She also has the responsibility for the home for the disabled.

We made no promises to her, but did hear her request for chairs and benches.  We told her we would pray about this and look for sponsors.  When we gathered outside of the clinic to carry on to STOP 3, Lynn made an executive decision – let’s go right now and see if we could find some chairs for them – giving them an immediate message of friendship.  So we did…. and about two hours later met at the clinic again and delivered 10 beautiful new chairs.  We had the sponsor for the chairs with us when we first visited!!!!  She just did not know this and of course we didn’t know that either.  Thanks Kim and Randy!

NOW FOR THE REST OF THE STORY……. when we returned to deliver the chairs, she went on to say that she had heard about the work at Dr. J’s hospital and at the Baby Hospital and at the Baby Orphanage.  She had asked one of the Dr’s from one of the other hospitals to tell us about her and her clinic.  However, she said they were wrapped in “our blankets” and they did not want to open the blanket up for anyone else.  Hmmmmmm.  Well, God had another plan.  THE CONFUSION OF OUR DRIVER AND OUR INTERPRETER opened the door for this plan.  The blanket has been opened.

The OLD RUSSIAN CHILDREN’S CLINIC needs benches for sitting and waiting for medical attention and guess what – we are looking for a sponsor for this and it is only going to cost $1200.  We know there is someone who will see this as a great blessing for the children of the Tokmok town – the city in which we are serving – who will come forth and serve with us by helping.

OUR PLANNED STOPS ENDED FOR THE DAY AT THIS POINT….  THIS IS KYRGYZSTAN REMEMBER!
WE JUST SHOW UP AND STOP FOR THE ONE IN FRONT OF US.
THE LAMb Team
Share
1